Researchers test virtual reality as a tool for promoting vaccination

234 random passersby got the opportunity to try a new virtual reality game, when researchers from the University of Copenhagen visited Fælledparken to test the efficiency of VR technology within health information. 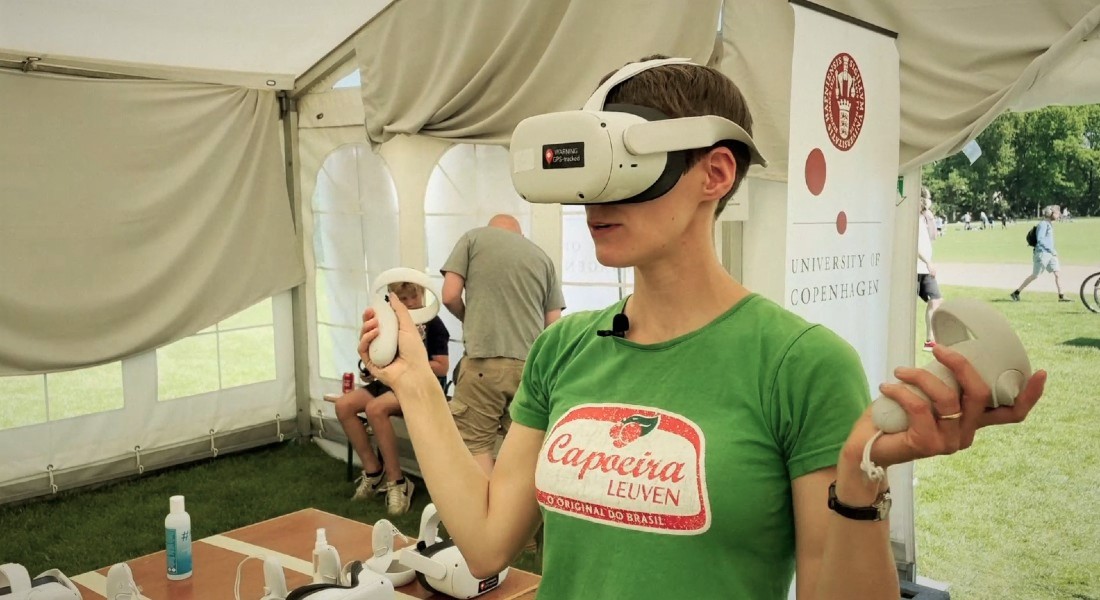 Are we more inclined to get vaccinated if we have personally experienced the effect of herd immunity through virtual reality (VR)?

Researchers from the University of Copenhagen set out to answer this question in a large-scale test conducted in Fælledparken on 5-6 June.

During the weekend, no less than 234 random passersby tried their strength against a new VR game that simulates the effect of herd immunity. The game is developed by researchers at the Virtual Learning Lab at the Department of Psychology and is funded by the European Institute of Innovation and Technology (EIT Health).

Video report from the test in Fælledparken, Copenhagen

The game asked the participants to cross a crowded square and avoid getting infected or infecting others in the process. In two scenarios, the player had to move around in a crowd of people where the majority (70 percent) had been vaccinated or where only few had (20 percent).

The game simulates the effect of herd immunity, and both before and after playing the game, the participants were asked about their opinion of vaccination. This was done to assess the effect of the game.

In the final analysis, the study is meant to uncover the effect of VR technology as a tool in health care and for supporting vaccination programmes.

This has a broader perspective than the current response to the Covid-19 pandemic. Previously, the WHO has listed general resistance to vaccination among the top 10 global public health threats, and the test in Fælledparken is part of a joint European effort to develop an app that may be adjusted to different vaccines and to different cultural and social backgrounds.

Besides the University of Copenhagen, the technical university ETH Zürich in Switzerland has helped develop the new app.

Analyses of the test in Fælledparken will form part of the further development work, but past trial tests of the new technology already suggest that VR is able to motivate people to get vaccinated. The ambition is to get general practitioners and other health professionals, among others, to use the app to promote vaccination.

The researchers responsible for the project are Postdoc Clara Vandeweerdt, Professor Robert Böhm and Associate Professor Guido Makransky. Read more about the project.