Republican Party lost core supporters after the attack on Capitol

The attack on the US Congress building in January 2021 was a violent manifestation of the deep political polarization in the US. Now Danish research shows that this attack caused even loyal party members to distance themselves from their party.

Five people were killed and many more serious injured when Trump supporters attacked the congressional building on Capitol Hill on January 6, 2021. In the immediate aftermath, the Republican Party lost core supporters in great numbers. This is documented by three researchers from the Department of Political Science in a new study.

A violent attack on democratic institutions limits party loyalty, even among core supporters. There is therefore a measurable cost to encouraging or even exercising political violence.

"The attack on Congress caused a large drop in people who outwardly identified with the Republican Party and Donald Trump – without re-identification in the following weeks," says associate professor Frederik Hjorth, who is one of the authors behind the study. The others are Gregory Eady, assistant professor, and Peter Thisted Dinesen, professor.

The researchers' findings indicate that there are limits to party loyalty:

"A violent attack on democratic institutions limits party loyalty, even among core supporters. There is therefore a measurable cost to encouraging or even exercising political violence," Frederik Hjorth assesses.

The study is based on panel data from a large group of American Twitter users. These data show that a significant number of Republicans removed their statements of sympathy for the party and Donald Trump after the attack on Capitol Hill.

The results contribute on several levels to the understanding of how violent political protests influence political identities and behaviour.

"We see, among other things, that the reactions to the riots in 2021 were not just local but national, and that they continued after the attack on the US Congress. In the two months that followed, only a small number of disaffected Republicans re-identified publicly with the party,” explains Gregory Eady.

The study of the Republicans' reaction to the attack on Congress is encouraging news for democracy, believes Peter Thisted Dinesen.

"Political violence is used in many places in the world – but it can have costs in the form of demobilization of party loyalists," observes Peter Thisted Dinesen.

However, he emphasizes that there may be other considerations which will continue to cause people to use political violence.

"Radicalized party members, like those who attacked the Congress, may choose to resort to violence based on their own interests – regardless of how it may harm the party. Our study does not uncover all aspects of political violence - but it contributes to increasing the overall understanding of what attracts or repels people from parties," concludes Peter Thisted Dinesen.

Read more about the study in this research article published in the American Political Science Review. 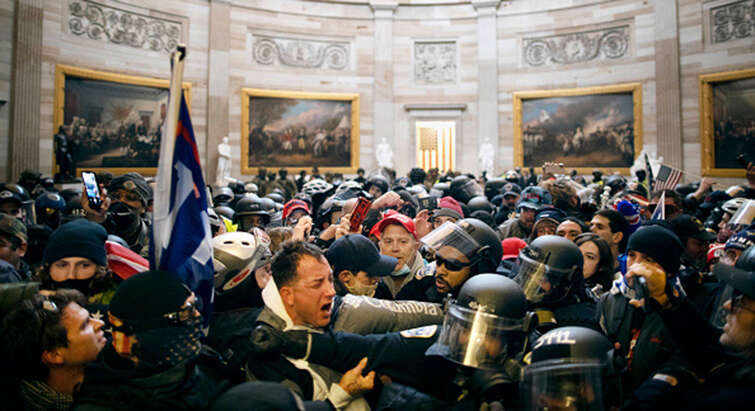 The struggle for recognition: The liberal world order is eroded from both within and without